Digital Libraries for Science: Botanicus and the Biodiversity Heritage Library
View SlideShare presentation or Upload your own. (tags: bhl digital)
Posted by Chris Freeland at 4:01 AM 1 comment: Today on the steps of the Old Courthouse, inside of which the historic Dred Scott case was heard in 1857, more than 1,000 people gathered in a nation-wide protest against California's Proposition 8. Speakers included local community organizers, leaders, and politicians: St. Louis Mayor Francis Slay spoke about equal rights for his 3 gay siblings, and Lewis Reed, the first African American President of the St. Louis Board of Aldermen, described marriage equality as a personal issue for him, noting that not too long ago he would not have been able to marry his wife, who is white.

Lead locally by organizer Ed Reggi, the event was part of a national grass-roots movement organized through social networking sites like Facebook and Twitter. The event was great on many levels, but more than anything I think it demonstrated the power of using social technologies to quickly and efficiently organize a "grassweb" effort - this was all planned and executed at a national scale, with participation from all 50 states, in less than a week!

What are the benefits of BibApp?

For researchers, BibApp allows you to:

For research groups, departments, and schools, BibApp allows you to:

For librarians, BibApp allows you to:

Posted by Chris Freeland at 12:58 PM No comments:

YARL: Yet Another Roomful of Librarians YARL: Yet Another Roomful of Librarians, originally uploaded by chrisfreeland2002.

Posted by Chris Freeland at 6:08 AM No comments:

Illegal? Not sure. I enjoyed the coffee, but it was no incentive to vote.

Add your pix to the Starbucks Election Coffee Flickr Group

Posted by Chris Freeland at 3:40 PM No comments: I Voted, originally uploaded by chrisfreeland2002.

And you should, too!

Posted by Chris Freeland at 10:14 AM No comments:

I'm in trouble with Sony 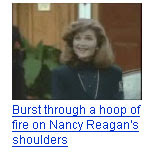 So a few weeks ago I grabbed a snippet of the TV show Designing Women broadcast on LifeTime, and posted it on YouTube. It was a funny bit about the high cost of membership to an exclusive club, where one of the characters envisioned holding her daughter's debutante/coming out party. The punchline was "for those prices, she ought to do more than just 'come out'...she ought to burst through a hoop of fire on Nancy Reagan's shoulders." I found the imagery hilarious, so I posted it.

And I did so with a purpose - I was curious just how long it would take before the copyright holder found this content, and what YouTube's mechanism for supressing this content would be. Turns out it took 51 days (originally uploaded 9/10/2008), and here's their explanation:
http://www.youtube.com/copynotice?video_id=mwCs460DfCo

Sony Pictures Entertainment has claimed some or all audio and visual content in your video Burst through a hoop of fire on Nancy Reagan's shoulders. This claim was made as part of the YouTube Content Identification program.

Your video is no longer available because Sony Pictures Entertainment has chosen to block it.

Please Note: Repeat incidents of copyright infringement will result in the suspension of your account and all videos uploaded to that account. In order to avoid future strikes against your account, please delete any videos to which you do not own the rights, and refrain from uploading additional videos that infringe on the copyrights of others. For more information about YouTube's copyright policy, please read the Copyright Tips guide. If you believe that this claim was made in error, or that you are otherwise authorized to use the content at issue, you may file a counter notice. For more information on this process, please see: How do I file a counter notice?

Please also take a few minutes to visit our Help Center section on Policy and Copyright Guidelines, where you can learn more about copyright laws and our Video Identification Service.